Giardiasis is an enteric disease of low setting areas caused by Giardia spp. In 1861, Antonie van Leeuwenhoek’s was the first person who brought Giardia under light but the economic and public health importance of giardia was not known until the late 20th century. It is considered one of the most common diseases associated with drinking water. It may be asymptomatic or may appear in form of flatulence and episodes of watery diarrhoea which further results in dehydration and weight loss. This diarrheal illness is a disease of humans and both domestic and wild animals worldwide. Transmission of giardiasis is carried out by the faecal-oral route. Waterborne transmission is the primary cause of transmission but ingestion of contaminated food and person-to-person contact may also serve the purpose. Giardiasis is prevalent throughout the world but poor sanitation areas constitute most of the cases.

Giardia is a tiny protozoan parasite classified into six species based on morphological characteristics. Among them, Giardia duodenalis (also known with other names G.lamblia and G.intestinalis) is specifically known for causing disease in mammals. Being a ubiquitous parasite and because of high endemicity, Giardia contaminates the water sources of developing and industrial countries equally. Depending on host occurrence, studies on genotyping has revealed eight genetic groups of Giardia (A-H). A and B groups have been found to infect humans and some animals while Group E specifically infects sheep, goats, cattle, water buffaloes and pigs.

Giardia has a noninvasive life cycle that continues in two alternate stages, cyst and trophozoite. Cyst turns into trophozoite by excystation on the luminal surface of the small intestine after getting exposed to gastric juice. Trophozoites are responsible for causing disease. Encystation of trophozoite occurs in the jejunum after getting triggered by biliary secretions. Once the encystation is completed, the cysts are released through stool to get ingested by humans or animals.

For centuries, man has been rearing farm animals for various reasons. These animals are essential for food, hides, wool and fertilizer but occasionally they are exposed to many ecto- and endoparasitic diseases. Gastrointestinal parasites serve as one of the major constraints in farm animal production. Productivity losses, because of decreased feed intake and reduced efficiency in feed utilization, associated with subclinical or chronic conditions of parasitic infections often result in large economic losses. Giardiasis is one of the intestinal parasitic diseases that leaves a huge impact on the economics of the farm.

Giardia is an emerging parasite especially of dairy cattle and also serves a significant role in zoonosis, which ultimately affects the economy and public health badly. Primarily, animals with less than six months of age get infected with giardiasis, but cattle of all ages are equally susceptible in low numbers. Giardiasis is prevalent in calves as they can get infected at an age of as early as four days. Persistent and lower prevalence is also reported in adults. The infection rate can reach up to 100% in dairy calves. Mostly transmission occurs between calves and chronically infected animals through the contaminated surrounding. Both beef and dairy cattle have been found to be suffering from Giardia duodenalis having a similar infection pattern and varying prevalence. Cattle are likely to suffer from two assemblages of G. duodenalis; zoonotic genotype assemblage A and livestock genotype assemblage E. Later one is the predominant genotype infecting cattle worldwide. 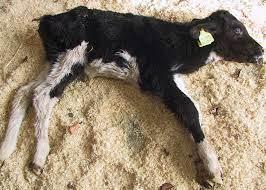 Giardia alone or its concurrent infection with other enteric pathogens has been implicated as the primary cause of calf diarrhoea. Especially dams in their periparturient period play a major role in the transmission of disease to their calves because cyst excretion rate increases rapidly in this period. Clinical manifestation of giardiasis in cattle varies from no symptoms to persistent mucoid or fatty diarrhoea which response to no antibiotic or anti-coccidial treatment. Malabsorptive diarrhoea hinders feed absorption resulting in impaired weight gain, reduced feed efficiency and decreased carcass weight. Giardiasis may have adverse effects on animal health and production leading to heavy economic losses to producers.

Giardia infects both sheep and goats with a wide prevalence ranging from 12.3% to 42.2% in goats and 1.5% to 55.6% in sheep. Assemblages A, B and E of G. duodenalis are the genotypes primarily infecting sheep and goats. Assemblage E is the major genotype in sheep/goats in most countries, whereas assemblage A being sporadically detected in Sweden, Australia, Belgium, the USA and Spain. The assemblage B has been occasionally detected in Spain and Norway. Like cattle, sheep and goats are infected predominantly with assemblage E but assemblage A has also been identified occasionally. Animals infected with assemblages A and B are sources of zoonosis.

Most animals suffering from giardiasis show asymptomatic disease but keep on shedding cysts in faeces. Younger animals are more likely to get diarrhoea. Soft faeces, intestinal gas, poor hair coat, weight loss or failure to gain weight are some other clinical signs. The faeces become light-coloured and may contain mucus (clear slime) and undigested fat (white or greasy spots). Impaired weight gain may delay the time of slaughter affecting the income of the farmer. In lambs, prevalence has been reported to range from 19% to 68.6% and in kids rate of infection goes from 10% to 50%. Dams in their periparturient period shed cysts and increase the likelihood of infecting their lambs/kids during their stay in maternity pens. 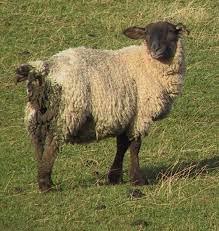 Age, health status, hygiene of environment and nutrition are all risk factors for Giardia infection. Young animals become infected from environmental contamination or from animal-to-animal contact. The infection spreads quickly when all animals are housed in a small surface area and animals of all ages are kept together while the quality and quantity of colostrum fed is inadequate. A cool or damp environment allows longer survival of cysts which in return increases the risk of infection in animals.

Gastrointestinal parasites including giardia, affect the health of the farm animals badly. In heavy infections, there is a drastic decrease in economic returns from the animals like reduced milk yield and poor quality of milk in cattle and buffaloes due to malabsorption of essential minerals like calcium and vitamins from the feed.  Prevention should be practised to avoid this disease. There should be proper handling of manure. A clean water supply should be provided to animals. Proper treatment should be given to diseased animals.

How do nutrients get into plants?